Secretary-General of the Euro-Atlantic Council of North Macedonia and President of YATA North Macedonia. He was twice elected as a Vice-President for Public Diplomacy and Communication of Youth Atlantic Treaty Association (YATA International), Brussels, Belgium.

2020 as a year has been shaped mainly by the COVID – 19 pandemic. The uncertainty and the global impact brought by the virus COVID-19, has put aside most of the ongoing plans, reforms, and issues the countries had and this situation is likely to continue even in 2021.

This uncertainty has put on test, not only the major Western democratic societies and organizations but also the liberal democracy as a system. When it comes to the already fragile democracies from the Balkan region, the COVID-19 pandemic has put more powder on the keg and complicated the already divided landscape in each of the Western Balkan countries. Public perceptions about the major players, issues, and threats within the Macedonian public space are divided. Many researches, that are very accurate with the reality, reflect the high polarization of the North Macedonian political space, where the main political subjects are far from each other, they lack constructive dialogue and consensus on major challenges and threats within the society.

On the social media platforms, political parties and their supporters are organized in closed and internally interconnected groups where pages interact within, however, they do not extensively interact with pages outside of their respective communities. This polarization and increasing party political division within the Macedonian society was already reflected in an inability of the main political parties to have consensus on the major political questions and issues. This has additionally divided the public opinion and the public trust in the institutions, which leaves an open field for easier systematic spread of fake news and conspiracy theories.

Although speaking about affinities toward the West and East is complex, all indicators show that there is a high appetite for further Western engagement. A majority of the population associate the West with economic prosperity.

As far as the attitudes and perceptions of the public, public opinion polls show that the huge presence of the Macedonian public is pro-Western oriented (support the western countries and institutions EU & NATO).  The public opinion polls that concern measurement of the attitudes of the populace conducted on numerous occasions and addressed numerous aspects of integration, so they were mostly positive. All of these surveys have demonstrated considerable pro-EU, pro-NATO, pro-Western sentiment of the Macedonian citizens. These studies show that the Macedonian citizens, with certain oscillations over the years, perceive the potential membership of North Macedonia in NATO and European Union favorably.

On the other side, even though Kremlin support among the Macedonian citizens is far lower than the one in neighboring Serbia or in Montenegro, again the Russian influence in North Macedonia cannot be neglected and outweigh, since it always comes in waves, though many individuals and groups in the country. Since Moscow doesn`t have a clear strategy for North Macedonia, usually in the past, the intensity of Kremlin influence was getting higher when there were challenges in front of the country’s path towards the West. 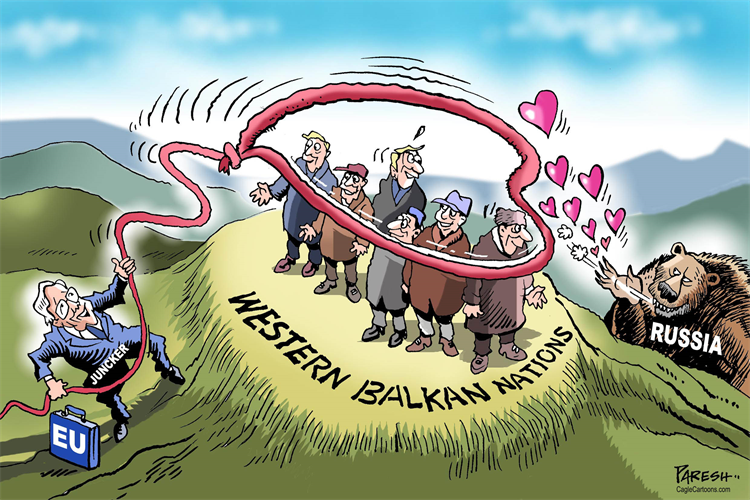 The content was usually created from smaller groups connected with isolated cases/issues on which other daily narratives were added and combined with emotions, historic and/or ethnic issues; shared through different channels and sources. In the recent period, especially when the membership in NATO was very close, a lot of disinformation narratives by internal and external actors were created. Especially during the change of the previous government, the referendum about the name of the country, the Prespa agreement, the pandemic of the COVID-19, etc.

In that regard, for ex. a relatively large proportion of the Macedonians (28%) think that Russia has handled the pandemic better. This is mostly the result of the disproportionate media reporting that primarily has been focused on Western countries and their efforts to tackle the Covid 19 crisis. In this regard, most of the information on the death epilogue and the overall difficulties in dealing with the crisis was mainly centered upon countries such as Italy, Spain, France, UK, and United States.

The issue of State-controlled information and disinformation that was emanating from Russia regarding the Covid-19 has contributed to creating the perception that Russia more effectively deals with the health crisis. Moreover, there was highly publicized information that was spread upon disinformation websites and consequently was widely shared on social media platforms (particularly Facebook) that Russia has invented a vaccine against Covid 19, while the efforts by the Western countries were less visible and less dominant in the public space. In addition, the Russian and Chinese assistance that was delivered in the Balkans, especially in Serbia, was highly publicized and broadcasted that had a disproportional effect upon building the overall perception of the populace.

The finger should not be pointed towards the lack of pro-European orientation in North Macedonia but toward the disinformation narratives and conspiracy theories that are largely present on social media platforms. As well as the unbalanced media reporting, that predominately draws upon the information on Covid 19 from the Western sources as regards the death toll (information that is more accessible in Western countries, than the one that can be found in Russian media).

Even the president of the country, Mr. Pendarovski, for DW has confirmed that there were attempts by “foreign entities” to systematically spread false news in the country, even using the situation with the COVID-19 pandemic. The domestic experts confirm that there are hundreds of portals and networks that share problematic and conspiratorial content, but also that they are problematic by their nature (no clear structure, lack of editorial standards, etc.). In addition to this, if the impact of the thousands of profiles and pages that follow them and share their content is considered, a complex picture of the domestic political landscape, one that is difficult for an ordinary citizen to navigate, emerges.

Overcoming the challenges of cybersecurity awareness

The case of telegram “public room”, challenges and solutions